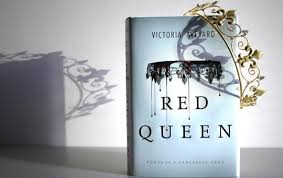 In The Red Queen, Mare Barrow is the quintessential bad-*** capable of taking out both Katniss Everdeen and Tris Prior without breaking a sweat.

This was a book set in an incredibly messed up world that was filled with surprises around every corner. One of the biggest surprises to me was the fact that I actually liked this book! Now, don’t get me wrong, I loved the other two hit dystopian works mentioned above. Luckily I got involved in those series before I was “dystopianed” out. The Red Queen took this somewhat played out genre and breathed some life back into it, making it a subject that I ended up really enjoying.

The book takes place in the future of the world we know today. The Silver Blooded people group that exhibit god like abilities rules this government. These men and women are simply called Silvers and all have some variation of a gift or special skill. Some are extraordinarily powerful and can do things like control other peoples’ minds, summon fire, or heal the sick and injured.   In this world, it is the Silvers who rule over their non-Silver counterparts, known as the Reds, who bleed the same as you or I.

Mare, a Red and the heroine of the story meets a Silver man who arranges for her to be employed into the service of the king instead of being drafted to fight in a war that has raged for as long as she can remember.

After she begins serving at an event known as the Queenstrial (basically a show of Silver women who feel they are worthy to wed the heir of the throne) Mare displays powers she never before knew existed within her Red blooded body. As the entire royal court bears witness to the powers of Mare, the King and Queen find themselves in an unusual predicament. Under normal circumstances, they would have her killed, and yet they can’t; now that the whole world knows the truth of what Mare is and what she is capable of. Acting as if she were Silver being raised by the Reds, they instead opt to take her in and give her a back-story along with a betrothal to the second prince in line for the throne one day.

Mare learns how to control her powers with the help of Julian, a man with a rather sordid past in the royal court. As Julian guides her through this chaotic new world, Mare learns how to best be the Silver girl she must now become while hiding her secret Red heritage. Mare’s relationship to her betrothed prince blossoms into a true romance, but the love doesn’t stop there. Mare also finds a connection to the first heir to the throne, who turns out to be the Silver man who got her the job at the palace in the first place!

In the end, this book is a strong first showing in a continuing story that does include additional books. It really has the makings of a fantastic series. Mare is never a woman that needs to be rescued and she certainly carries an edge to her personality that makes her extremely likable.

The story line takes some exhilarating twists and turns that I didn’t foresee. Yet, it answers questions as I wait to read the next book. All and all, this is a book I would recommend to anyone who loves an action packed YA adventure. It would especially lend itself to anyone looking to find a strong female lead to talk to your teenage daughter about. It sure helped me to find something new to talk to my own daughter about and that in of itself is worth the cover price!